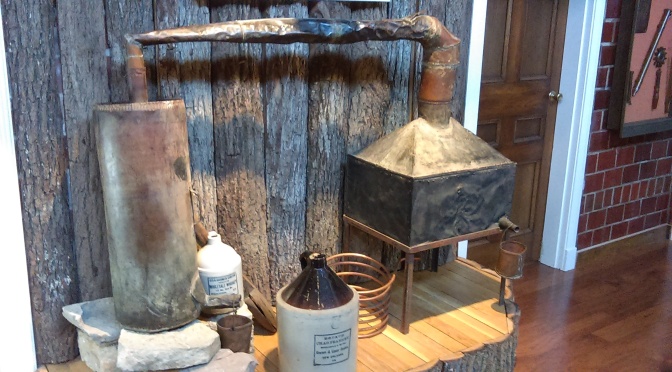 During my travels when I tell people I’m currently living in Kentucky the first thing most often mentioned is bourbon.  Not the bluegrass, nor fast women and beautiful horses…um wait, beautiful horses and fast women…. Oh forget it!  You get the idea, it’s about the bourbon.

So began my adventures on the Kentucky Bourbon Trail.  Now let me say, while I’m not a t-totaller, bourbon is something I know very little about.  I think it uses corn, as does all good moonshine (that’s another post), as a basis for it’s mash.  And they put it in barrels for a really long time.

My first stop was the Bulleit Frontier Whiskey Experience at Stitzel-Weller.  This is also where I picked up my bourbon trail passport.  This is a guide and record of the distilleries you visit along the trail.

I’m learning that the Whiskey/Bourbon business is competitive, congenial, secretive (very secretive), complex (legally) and almost fraternal in natural.  You see many of the key players have worked at other distilleries, started their own or advised someone else in making fine liquor.  Yet, they all have to play be the same rules.  Yes, like every other business in America they have rules. In fact Congress voted in place one of these rules in 1897.  The “Bottled-in-Bond” became law actually several years before any FDA rulings were past!  In fact during the Prohibition error, sorry Era (must be the whiskey talking) alcohol could only be sold (legally) with a Dr’s prescription.

SO, what is bourbon and how do they make it?  Legally, yes there is a legal definition actually passed by Congress in 1964, It must be…

WOW, I’m not so sure some foods can meet all those requirements.

My tour began in with a history of the distillery and that’s where I began to appreciate the “bourbon community” of master distillers.

At this particular site there is one of the first vertical stills used in commercial production.  But let’s get on to the good part…

The bourbon is stored in the charred oak barrels in a “rick house” to age.  This aging process is done in an environment that is NOT climate controlled.  Trust me, it was quite cold when I was there this February.  The exposure to the elements is essential to the aging process.  As the barrels heat in the summer months the bourbon passes into the wood of the barrels through the charred wood.  Then in the cooler months it returns in solution bringing with it the natural coloring and the flavoring from the barrel.  Charring the wood causes the wood to carmel and add flavoring to the whiskey. Remember, Congress said “no added coloring or flavoring”?  This is how the bourbon gets it color and flavor.  AND, the longer it stays in the barrel exposed to the elements, the more color and flavor.

Now the Bulleit brand bourbon is all “small batch” bourbon.  This means they select some barrels from the first floor of the rick house and some from the seventh floor and a few in between.  Why?  To create the taste for that particular age of whiskey.  Sorry, now that it’s aged we can call it bourbon, well after it is proofed to be bottled.

But what about the barrels?  Yes they can begin to leak and need repair.

The barrels are carefully weighed with the scales to the left and then drained into the stainless steel vats on the right.  Each barrel has a serial number so that the starting weight and the ending weight can be veriefed.  Bourbon out must equal bourbon put back in, remember it is under government oversight.  Once the barrel is drained, hoops knocked down then the repair begins.  The cooper uses cattails to place between the leaking staves.  Cattails do not add flavor and they swell when wet sealing the leak.   Then the barrel is placed back into the rick house with the carefully weighed contents to finish aging.

Now to the best part, tasting the outcome of all that aging!

Remember how there had to be at least 51% corn in the mash?  Well there can also be whiskey made with rye as the grain of choice.  That’s the rye whiskey you hear about. And these folks make a rye with just a touch of malt to take the edge off.

Which was my favorite?

I will try and post some more from might visit to Evan Williams distillery in the next couple of days.

Before I go one more picture… 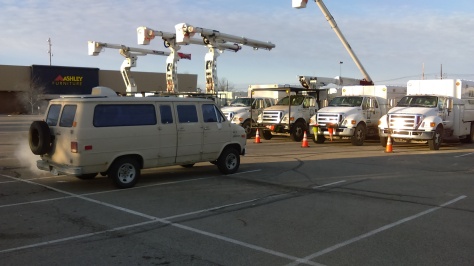 No this is not a standoff between the SS Phoenix and enemy trucks!

I posted this picture on a vandweller site I frequent and had several comments.  So I had to go back and look at the picture.  It does kinda look like I gottem’ out gunned.

As always,  Get out, Be safe, and Go adventure…