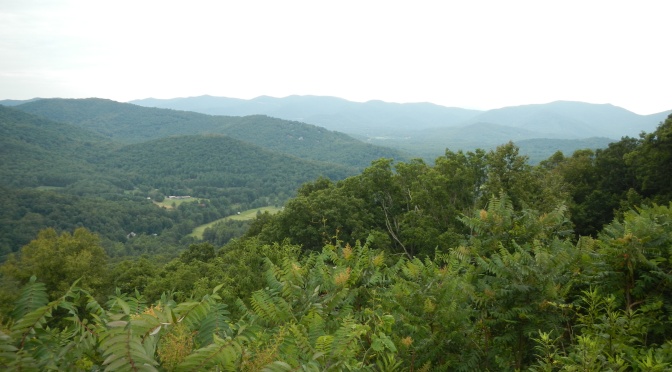 This last weekend was one that basically directed itself.  We started out to the Mountain Bushcrafters Alliance skills day and wherever the van rolled from there.

I’m going to share these wanderings in a couple of posts here since the activities were totally random and therefore unrelated to each other.  We started at a gathering of folks that share a love of doing things “the old fashion way” while teaching each other how to “go farther and stay longer”.  Then moved into a study of early folk dance and from there a PowWow gathering of 5 or 6 tribes being represented.

Understand that the only planned stop was the MBA skills day the other two were literally where the van rolled. We left the MBA gathering and spent the night on the road (aka Marathon/Wendy’s parking lot).

We decided to head further north and find what we could get into…  But, first a shady spot to fix breakfast.

We decided to check out Berea, KY to see if anything was going on there.  Since it was Sunday the streets were pretty much empty and the sidewalks were still rolled up.  We did stop in at the Russel Acton Folk Center.

“The Russel Acton Folk Center was built and owned by a group of volunteers, with the help of many generous donations, in the mid 1980’s. The dream of its namesake, Russel Acton, was to preserve the art of Folk Dancing in Appalachia.” — Facebook/ Russel Acton Center

Here’s a sample of some of the activities to preserve and promote our heritage in dance.

They were having a short session and we arrived after they started so that’s all I was able to video.  And I want to say thanks to everyone to allow me the chance to video.

“Get Out, Be Safe, and Go Adventure.”