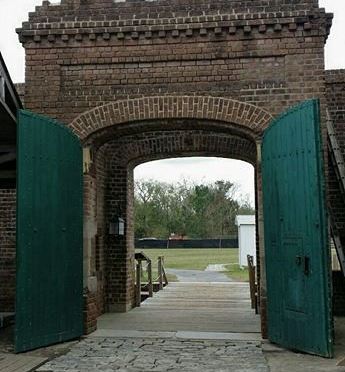 Today we found ourselves following a path less traveled that led to a fort many have never heard of, named Fort Jackson.

This fort was built in 1808 as a position to defend Savannah from attack by sea.   This early spot in history makes it the oldest brick fortification in Georgia.  In 1812, the rest of the “world” was at war.  Two of our biggest trade partners at that time were England and France.

The cannons stood quiet during the surrender.

We bought and sold many goods that were shipped out of the port at Savannah.  So, the need to protect the bay entrance became more important.

A hall between chambers.

The next battle action this fort saw was during the Civil War in 1862 when it was shelled by an  escaped slave named Robert Smalls.

The moat looking toward the river.

The moat looking away from the river.

Shortly after the evacuation of Savannah, and the surrender that followed,  William T. Sherman captured Savannah by land.  On December 20, 1864 the fort fell to Union hands.  The fort, like Savannah, was also evacuated and the subsequent surrender avoided major bloodshed at the fort. 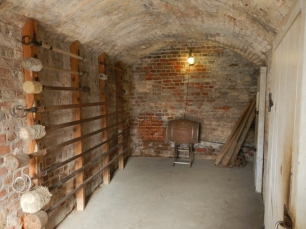 One of the ammunition magazines.

The cannons stood quiet during the surrender.

Due to Sherman refusing to use black troops in the war, the 55th Massachusetts Regiment remained garrisoned there.   Because of its history there have been many flags over this fort.

During the tour of the fort you can expect twice a day firing of a cannon at 11:00am and 2:00pm, along with a presentation given to us by Daniel McCall about the history of the fort.  His knowledge and ease of presentation made the visit come alive.

Thanks for travelling along with Brenda and I as we wandered north through Georgia.

Get Out, Be Safe, and Go Adventure.