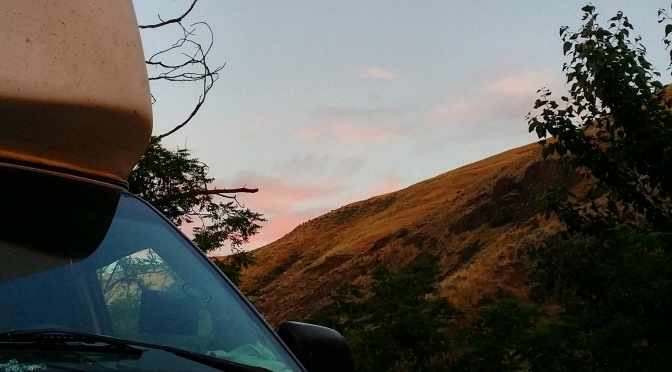 FreeCampsites.Net is a real good starting point to look for free or cheap sites. There are pages for every state describing their sites to be found by a simple Google search. Or, even search ”free camping near me” and you be directed back to some of these. Back to the state parks for my small rant. I needed a simple “primitive” site, no water, no electric, no sewage, a simple site, a parking place basically. The cost was going to be $32/night! This was $23 for the site and $9 for a “state park vehicle permit”. So just be aware that stat parks in general have other fees associated with them. That’s the sort of budget item that gnaws at you when you’re really wanting that hot shower stuck in a smaller town with few other options.
Back to our quest to find Libby, and me, some peace and quiet. As you can see just getting in was an adventure…

This site is called Douglas creek in the FreeCampsites listing.

Then it turned into a road/gravel road. While the road was not that bad for the van, though we did shake down a little of our packed items. We did cross one small running stream in the road yet turned around at the next larger and longer one. The site we returned to had hay growing all around which felt like carpet going barefoot. And of course the view was also spectacular. QUIET, we’d found it. 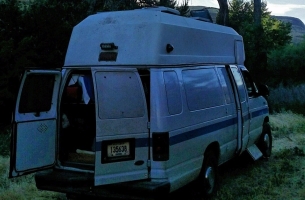 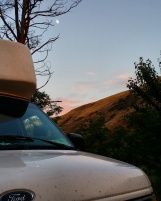 .
Layla managed to find the creek that was running in a deep cut behind camp. In fact I could barely look over the brush and see far enough down to see water, and Layla.

We have a need to get away from cities, crowds, and sometimes people in general to recharge our batteries. This was a place to do just that. Brenda and I edited pictures, wrote, and prepared stuff to be uploaded the next time we are back on the grid. These places also give us time to work on our projects or just lay around with the four-legged members of the clan. Which we did a lot of at this little stop. It was easy to just relax. Let me show you what I mean…

So from both of us.

“Get out, Be safe, and Go adventure”