This is truly proof we live in a small world with all kinds of timelines.
First, let’s go backward in time.
[[[2013]]]    I stopped at an intentional community (Henry Thoreu’s definition) in Tennessee while headed south.  This was an open community that more closely resembled extended family. Anyone was welcome there with only a couple “requests”.
The community garden and animals needed tending and everyone was expected to do some part.  Nobody ‘assigned’ your part, that was for you to find and decide. The name of this place was “Shut Up and Grow It”.   There was some connection to other feed the people groups hence, the grow it part.
###  First link to Shut Up  ###
As you could see from the blog post a great little place with a mission to allow people to live their lives.   Now fast forward a bit to ….
[[[2015]]]    Brenda and I stopped at the same place I had been a year or so ago.
Except this time we were visiting at Christmas time. Our travels were taking us south so why not go west first?
Christmas Eve at “Shut Up and Grow It” was a unique experience. While a number of the the folks there were gone traveling to family.
We were greeted again openly and almost as extended family. Everbody pitched into the evening meal either foodstuffs, cooking expertice, or critique.
And we made friends there that we stay in touch with today.

So what does all this have to do with Oregon 2017, our vanlife, or even the total ecplise?
It goes back to those timelines. You see we returned to the Oregon coast to escape the heat east of Eugene only to realize that the coast area
in the line with the “area of totality” was going to be crazy. At least that was the opinion of all the media and therefore most of the people.
So we fell for it and headed for the forest and back to North Fork in the Suislaw National Forest. We hoped that all the places were not already full of people driven by the same instincts as ours.

[[[ 2017 ]]]  We were pleased to find not only was there a space, there was that bus again.   Before you go back and look at the above paragraphs searching for a bus reference there isn’t one.   We FIRST saw the bus several days ago when we were staying here while headed south down the coast. That’s when the world as a whole shrank in space and time.   Now Brenda will tell you I will talk to just about anyone, ok everyone. So, after having spoke to the neighbors one of them comes up to me and says she knows me.
While that was no cause for alarm it did surprise me. She said she recognized the picture of Layla and I on the card I gave to one of the travellers in their group.
(I have a suspicion it was Layla she recognized.)

It had been a little more than three years, she had longer hair back then and was holding a baby about 6mos. old.  It was Jen from the “Shut Up and Grow It” community! 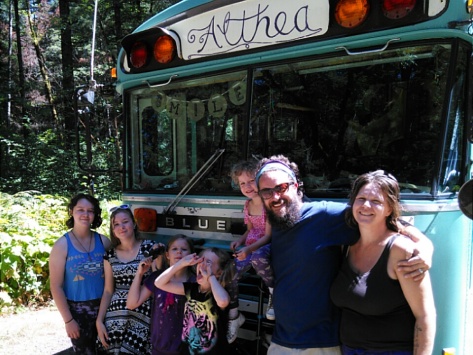 Now the five kids were all much bigger and the 6mo old was a curly-headed delight riding a bike.

You see, the timelines crossed and then crossed again, this time on the other side of the country.   Since we’ve spent a night or two in casino parking lots what are the odds of running into people like that.
AND, even larger, recognizing someone you ran into on a chance meeting. (OK,ok, I know it was Layla’s eyes.)
It was great fun to run into Chris and Jen again. Their bus had been painted, the kids had grown much bigger, my van was totally different, and I was no longer traveling alone. We were all amazed at how things had lined up to bring our paths back together.
This meeting renewed my faith in our travels and in our guidance through this big old universe. I learned that Patrick had changed the name of the place to “The Garden”.
The name change may have helped with garnering a little more local support.

https://www.facebook.com/shutupandgrowit/
So more than a **Flashback Friday** we moved back forth along a timeline that ties us all together.
My usual tagline is flavored this time with good memories in the past and to be made in the future.